California Attorney General Rob Bonta today announced the eradication of nearly 1.2 million illegally grown marijuana plants and the seizure of over 180,000 pounds of illegally processed marijuana as part of the annual campaign of the California Department of Justice Against Marijuana Plantation (CAMP). Attorney General Bonta also called on the California Department of Justice to launch a six-month review of the CAMP program in light of changes to the law since the program began in an effort to build on existing efforts to combat environmental, labor and economic impacts of illegal cultivation. During this year’s 13-week season, the multi-agency campaign carried out 491 operations, recovering 165 weapons and removing more than 67,000 pounds of cultivation infrastructure, including dams, water pipes and containers of toxic chemicals.

[Screenshot of video from the California Department of Justice]

Operating in 26 counties, CAMP teams have eradicated crops on public and private lands, including Los Padres National Forest, Cleveland National Forest; San Bernardino National Forest, Shasta-Trinity National Forest, Klamath National Forest, Sierra National Forest, and Sequoia National Forest. the health and safety of our communities ”, said Attorney General Rob Bonta. “Today, I ask my office to review the CAMP program and ensure that we are using our resources to effectively address the environmental, social and economic impacts of illegal cultivation. Whether it’s dumping toxic chemicals into our waterways or robbing the state of millions of dollars in taxes, illicit marijuana cultivation has far-reaching impacts and unintended consequences. I want to thank all of our federal, state and local partners for their tireless efforts this season. It will take all of us to work together to ensure that the California cannabis industry is in the legal and regulated market, not the illicit market.

“Our decades-long work with our partners in allied Justice Department agencies is more important than ever, given the pressure exerted by California’s fish and wildlife in the face of historic drought and an extended wildfire season. ” said David Bess, deputy director and head of the law enforcement division for the California Department of Fish and Wildlife. 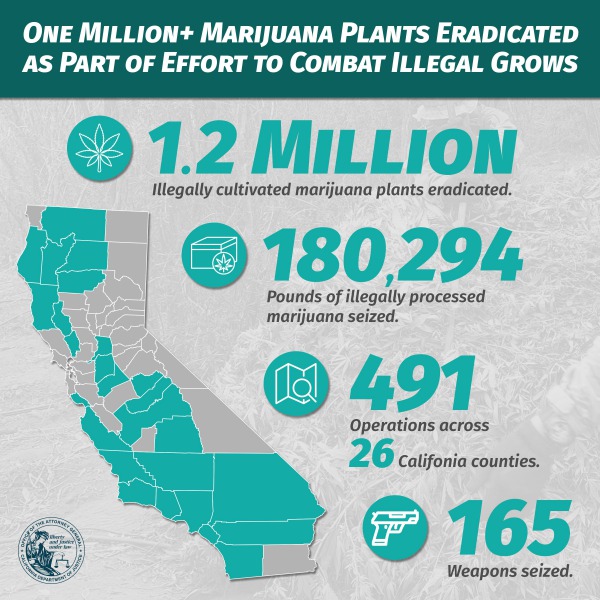 “Protecting California’s precious ecosystem is our number one priority and we rely on unwavering partners to fulfill this mission. There is no doubt that our partnership with the Department of Justice has made huge strides in protecting the environment for future generations of Californians.

“The illegal cultivation of marijuana on public lands destroys wildlife habitat and causes degradation of public lands through water diversions, illegal dams and the use of dangerous chemicals that contaminate our streams and streams. and endanger visitors to our public lands.“said Karen Mouritsen, California State Director for the Bureau of Land Management. “The BLM is proud to protect our public lands and maintain public safety with our national and local law enforcement partners under CAMP.”

“The Forest Service is a proud partner in the fight against the destruction of our precious natural resources due to the illegal and reckless cultivation of cannabis” said Don Hoang, special agent in charge of the US Department of Agriculture, Forest Service, Southwest Pacific region. “Together, we protect the environment, wildlife and water that support our communities, our farms and our food production.”

“We have been tracking the environmental damage caused by the illicit cultivation of cannabis on public lands since 2012 and have not seen any decrease in the amount of banned and restricted pesticides, water theft and diversion, as well as poached wildlife. and poisoned over the years ” said Dr. Greta Wengert, Executive Director, Integral Ecology Research Center. “Sadly, 2021 has not been different in the level of these harmful tactics used by producers on our national forests and BLM and state lands, underscoring the continued need for eradication programs like CAMP to detect cultivation sites and help. the police to eradicate these destructive cultures. Eradication followed by safe rehabilitation will help move towards full protection of our country’s precious lands and public resources from this blatant activity.

During the 2021 season, CAMP teams eradicated nearly 1.2 million illegally grown marijuana plants, removed cultivation infrastructure and illegal pesticides, and disrupted the diversion of water from streams and rivers. At many growing sites, teams have found highly toxic chemicals, including carbofuran, methyl parathion, aluminum phosphate, zinc phosphide, and illegal fertilizers. Carbofuran, a deadly insecticide that is effectively banned in the United States, is used to kill marijuana plants that feed on wild animals. It remains on plants after application and seeps into nearby soil and water sources, posing untold risks to public health. Just a quarter of a teaspoon of carbofuran can kill a 600 pound bear. And as California finds itself in the midst of an unprecedented drought, the cost of illegally planting marijuana is particularly high for communities and farmers already facing water scarcity. Researchers estimate that a marijuana plant consumes six gallons of water per day. Multiply that across the entire illegal market, and the cost to the agricultural industry – including the legal cannabis market – cannot be ignored.

In 2021, operations were carried out in the following departments:

Listing offered on the over-the-counter markets and ...

HEXCEL: DE / Discussion and analysis by ...